Hair is a woman’s crowning glory. There is no argument to this statement because a contest between disheveled hair vs well fashioned hair and well cut hair always wins on the popularity on beauty and on life. I decided for an unknown reason that I wanted an undercut. Undercut/High Fade/Bald Fade/Hard Part/High & Tight originated in England in the Edwardian era (around the 1900’s – 1920’s). A style common among men  of  the working class and of the  poor. Back then, it signifies unskilled barbering.  I was aware of the undercut but has no inclination until now. My interest was piqued by an Instagram post of Ms. Alice Dixson, an actress in the Philippines. Her video post showed it could be hidden and not to be totally out there. My decision to do it now is  because I want something different or something that I have not done or maybe, it is an act of  Rebellion. Nice chick persona with a rebel in hiding. I had my undercut done by a barber because most of the hair salons that I called does not do undercut. Pinterest pictures of undercut does not come close to what my undercut looks like. There is a tiny bit of disappointment because it did not turn out the way I wanted to. Social media and reality, most of the time does not jive. My advise for those  women or men who wanted  this type of cut, look for a barber that is an expert on this field. I thought that the barber that I went  to are proficient in doing this type of style, unfortunately, it seems that they are not.  Another advise is to inform  the barber ahead of time what type of designs you wanted, show the picture or better yet, send the picture through an email a day or couple of hours from your scheduled appointment so that can prepare how  to take on an intricate design. Don’t forget to ask how much  and how long. For the cut,  I paid $40 plus tip ( I gave a big tip because it took the barber like an hour to finish the cut and for effort). My experience was comparable to an eyebrow threading, there is that grinding and ticklish feeling. Would I do it again? Maybe, depending on whose cutting my hair…CHOOSE WISELY.

My  reality  (left side)  vs.   alternate reality (right side) 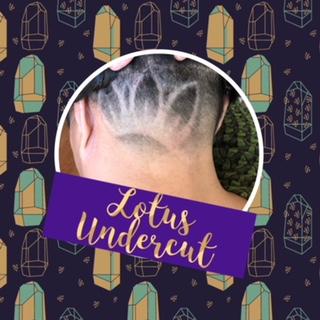